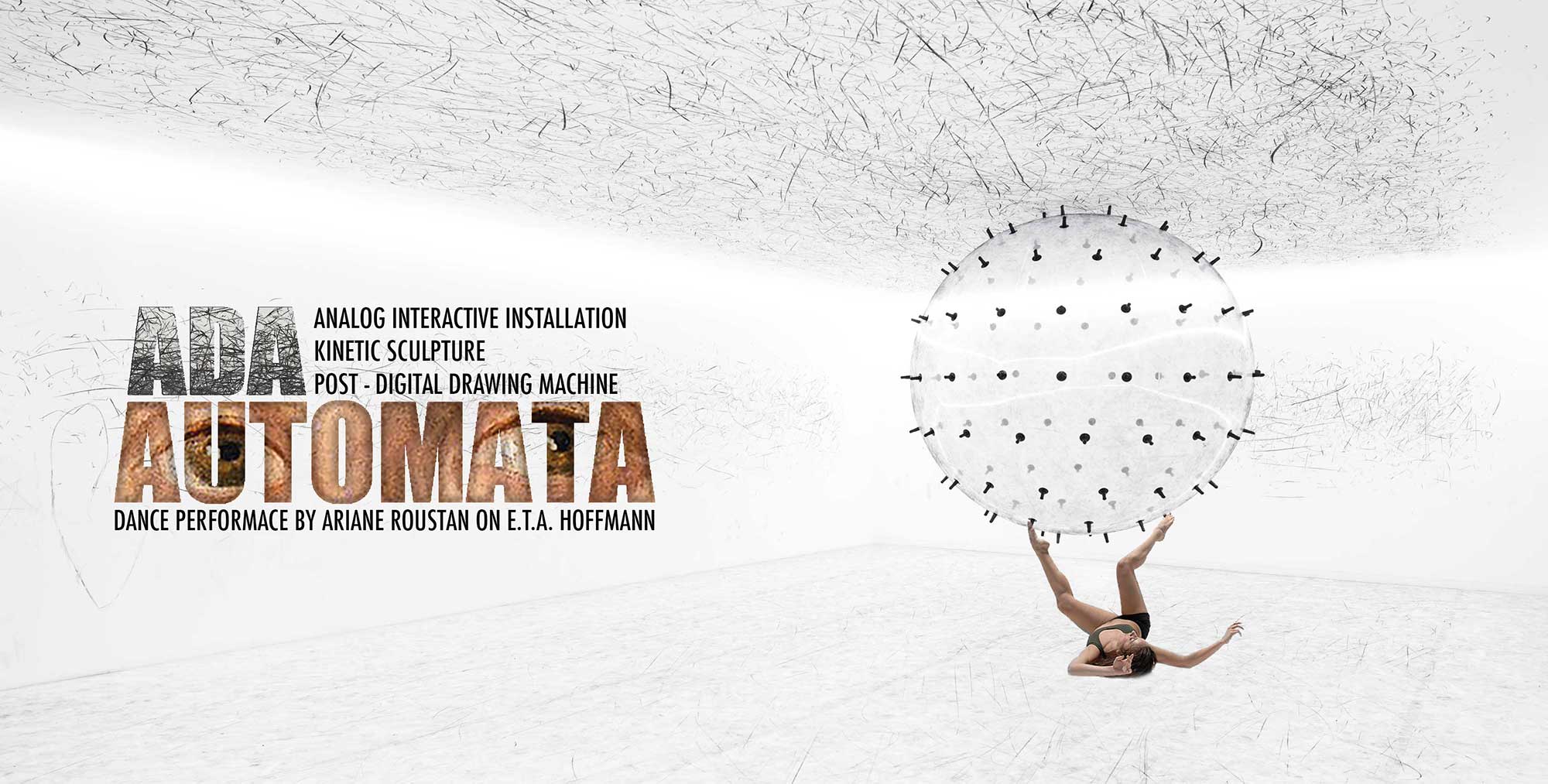 CHRONIQUES  Biennale des Imaginaires Numériques
MSECONDE NATURE and ZINC are digital imagination incubators that have been working for several years towards fostering and promoting contemporary creation, advancing the understanding of the world in the digital age, and helping audiences appropriate technologies to develop their creativity and emancipation. > more

ADA  analog interactive installation
Named after 19th century English mathematician, Ada Lovelace, ADA is a self-forming artwork, visitors animated, under destruction sculpture, a post-industrial “creature“, resembling a molecular hybrid from nano biotechnology. Filled up with helium and spiked with charcoals, the membrane-like globe floats freely in each room it is located and leave marks on the walls, ceilings and floors. However hard the visitor tries to control «ADA», to drive her, he would notice very soon, that «ADA» is an independent performer. It is a movement exprienced visually, which like a computer make an unforeseeable output after entering a command. > more

Ariane Roustan  AUTOMOTA
Born in Aix-en-Provence, France. She received her dance training at the École Nationale Supérieure de Danse de Marseille, the Jeune Ballet du Québec in Montréal and the Palucca Schule Dresden. Her first engagements took her to New York, where she danced for Sidra Bell, Bennyroyce Royon and Brian Carey Chung. From 2009 to 2013 she was engaged by the Tania Pérez-Salas Compañía de Danza in Mexico, with whom she toured internationally in several pieces. She then returned to Europe to perform and choreograph with a Parisian collective of multidisciplinary artists. In Italy and France, she freelanced with choreographers such as Paolo Mangiola, Fabio Crestale and Shi Pratt before joining Compagnia Zappalà Danza in 2015 and participating in several creations and tours of the Sicily-based company. Since the 2017/2018 season she has been a member of the ballet company of the Staatstheater am Gärtnerplatz. > more

Theme 2022  NIGHT
Much like levitation and the quest for eternity that we addressed in 2018 and 2020, nighttime connects us to dreams, to imagination, and the power of transformation by providing a new way of seeing things and beings. These notions, both spatial and temporal, offer a period of immobilization and therefore have a subversive and political dimension. The night as a possible heterotopia will bring this trilogy to a close. > more

E.T.A. Hoffmann
A man of many talents. In Goethe’s time, he invented an utterly delirious fantasy and displayed an almost postmodern sensibility. Hoffmann is anything but a dusty classic.

Art After Dark: San Francisco Artwork That Lights Up